The New Wimbledon Theatre has been Grade II listed and is a beautiful masterpiece that has stood in Merton, London for over a century. The theatre is ripe with history and has hosted some of the biggest plays, musicals and performances from around the world. With an immense seating capacity, this is one of the premiere venues in London. 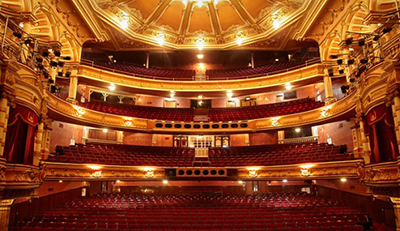 The two architects, Cecil Massey and Roy Young, drew up the first drafts for the theatre. There have been unconfirmed rumors that a design was made in 1908, but this is still up for debate. The theatre would go from draft to completion by December 26, 1910 when the theatre first opened its doors to the public.

The theatre is very unique for the time period because it has a Turkish bath within the basement that was designed in the Victorian-style. This is the only theatre in all of Britain to contain a bath of this style.

Opening day was a festive event. People from all across the city and many neighboring cities would come to the theatre and watch Jack and Jill on stage.

When WWII was taking place, the theatre grew in popularity. At this time, big names would perform on stage and locals would flock to the theatre to get their mind off of the world’s troubles. Some of the big names that performed on stage during this time were:

This led to the theatre’s popularity swelling.

There have been numerous premieres that have taken place at New Wimbledon Theatre including Oliver! and Half A Sixpence.

The theatre was owned by the same owner for over 90 years before being sold. The theatre fell on hardships after a 1990s refurbishments, and the theatre would be forced to close for a year in 2003. Eventually, the Ambassador Theatre Group would go on to manage the theatre.

The new owners, ATG, are the second largest theatre group in the country.

The theatre was not damaged in WWII, but there were precautions made to ensure that the building was not a focal point of attacks. A beautiful, golden Roman Goddess stood atop of the building at the time, but had been removed.

When the building was refurbished in 1991, the statue was placed back on the top of the building. There was also a major refurbishment in 1998. The building still maintains many of its original internal features.

The theatre produces some of the best shows in the world. There are currently 1,670 seats spread across all three of the floors inside of the venue. There are also 80 studio seats. While some shows do require more room, seating capacity still ranges above 1,500 people.

Seating for disabled viewers as well as a seat for their companion is offered. There are hearing devices that can be requested to allow for the utmost in audio quality during the show. Wheelchair adapted toilets are available as well as bar facilities. Guide dogs are also allowed within the venue.

In recent years, since the theatre’s acquisition, there have been major events that have taken place. Among them includes hosting Prince Charles’ 60th birthday celebration. This celebration would see major celebrities, such as the late Robin Williams, and many others in attendance.

The highest grossing show would follow just two years after the birthday celebration in 2010. During this time, Peter Pan would be played and would break the previous highest-grossing record for the theatre.

There have been 101 pantomimes to take place within the theatre’s 103 year history.

The venue currently offers group bookings that allow large groups to save money on their booking. Huge savings can be had by groups, hospitality packages are included and multiple shows can be reserved at one time for even further savings.

Directions to the Theatre

Directions to the New Wimbledon Theatre are simple. Located on The Broadway in Merton, London, the theatre can be accessed easily by:

The tube station in South Wimbledon is within just 10 minutes walking distance of the theatre.

The theatre is just off of A219. Signs for Wimbledon will be present on all major roadways and should be followed right into the city centre where locating the theatre will be easy.

Rich with history and luxury, guests from all around the world flock to the famed theatre every year. Celebrities and royalty have laughed and watched shows at the theatre and now you can too. It is said that even the cheapest seats have spectacular views. The staff is friendly and the grounds are kept exceptionally tidy all day long.

Tickets to any show can be purchased directly through the ATG.

You can find the address here, get contact details here and take a look at the seating plan here.

This website uses cookies to improve your experience while you navigate through the website. Out of these cookies, the cookies that are categorized as necessary are stored on your browser as they are essential for the working of basic functionalities of the website. We also use third-party cookies that help us analyze and understand how you use this website. These cookies will be stored in your browser only with your consent. You also have the option to opt-out of these cookies. But opting out of some of these cookies may have an effect on your browsing experience.
Necessary Always Enabled
Necessary cookies are absolutely essential for the website to function properly. This category only includes cookies that ensures basic functionalities and security features of the website. These cookies do not store any personal information.
Non-necessary
Any cookies that may not be particularly necessary for the website to function and is used specifically to collect user personal data via analytics, ads, other embedded contents are termed as non-necessary cookies.
SAVE & ACCEPT